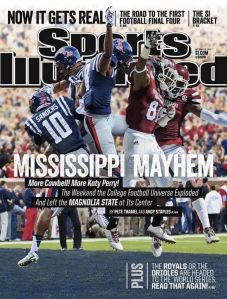 A: The Mississippis – We live in a world where Mississippi State is number one in the nation. Let that sink in.

Mississippi State is under .500 all-time (528-555-29) and has one conference title to their name (1941). The briefly mentioned pre-season dark horse in the SEC West has one hand on the steering wheel now after two convincing wins against Texas A&M and Auburn. QB Dak Prescott leads all Heisman talk. It’s an incredible achievement for sixth-year head coach Dan Mullen. The Bulldogs have had an average recruiting class rank of 35th over the past five years, which isn’t even good enough to crack the top 10 in the SEC. Mullen and his staff have churned out a deep squad by finding undervalued prospects in the rural parts of the state, putting together a great strength and conditioning program, and having the support of an athletic department with the patience to see it all through.

Of course, you can’t discuss what’s going on in Starkville without bringing up their neighbors to the northwest. The Ole Miss Rebels followed up their emotional victory over Alabama by thumping Texas A&M 35-20. The Rebels defense is best compared to hyenas swarming about, and DE Robert Nkemdiche is an inexplicable bear that bursts through with a moment’s notice and knocks you on your ass. The Rebels have had a little more hype – a top-ranked recruiting class in 2013 that included Nkemdiche served notice that Hugh Freeze would be reckoned with – but there was always the question of breaking the glass ceiling. Indeed, both schools have found their way to the top; the road to the college football playoff runs through the Magnolia State.

B: Minnesota/Iowa – After three years of making noise for reasons good (two bowls in a row) and bad (head coach Jerry Kill’s health scares), Minnesota is off to a quiet 5-1 start. Saturday’s 24-17 win at Northwestern put them at 2-0 in the Big Ten for the first time since 2004. Everything about the offense is actually kind of quiet. TE Maxx Williams leads the team in receptions – with just 12. RB David Cobb is actually in the top 10 in the nation in rushing yards per game (136.5), but sits 4th in the conference behind the nation’s leader, Indiana’s Tevin Coleman, and Heisman candidates Melvin Gordon and Ameer Abdullah. The Gophers offense itself is pretty pedestrian, ranking 70th in F+/-, but the stout defense is ranked 23rd, carrying the team. The special teams has also been a big positive, with the kick return for the touchdown being the decider on Saturday. Kill is 1A for coach of the year in the Big Ten, with Rutgers’s Kyle Flood hanging out at 1b.

Further south, fireworks exploded at Kinnick Stadium. Iowa’s 28 first quarter points were more than the Hawkeyes had scored in a single game this year, and they held off the aforementioned Coleman and the Hoosiers relentless offensive attack to win 45-29. They, too, are off to a quiet 5-1, 2-0 start, led by a stout defense (18th in F+/-) and held down by a less-than-good offense (84th). QB Jake Rudock returned from injury on Saturday to take part in a two-QB system alongside C.J. Beathard. Rudock took the majority of the snaps and played the best game of his career, throwing for 210 yards and two touchdowns. Both the Gophers (vs. Purdue, @ Illinois) and Hawkeyes (@ Maryland, v. Northwestern) have manageable schedules through the next few weeks before they square off in Minneapolis on November 8th – a match-up between the border rivals at 7-1, 4-0 could be a positive spotlight game for the Big Ten West.

C: Defenses in the TCU/Baylor game – A 61-58 game gives you all sorts of box score figures to chew on, but the most incredible stat this game provided was 11 punts! Baylor punted four times; TCU punted seven. TCU forced three turnovers, and Baylor forced one. 15 combined stops for the defenses in a 39-possession game. To put this in perspective, consider the NCAA average is about 25 possessions per game. If this game were to be played at that pace, the score would have been about 39-37. Two great offenses got the better of two very good defenses, as is wont to happen sometimes.

This game has the stuff to be that of legend should Baylor continue onto the Big 12 title. A daunting Big 12 schedule is still on tap, starting with a sneaky letdown possibility in Morgantown Saturday, and games against Oklahoma State, Kansas State, and at Oklahoma still on the docket. Baylor fans, however, should take solace in the victory after this 12-round fight. No matter how potent your offense, coming back from 21 down with 11 minutes to play is special. One spot in the college football playoff now rolls through Waco.

D: The ACC slate this past week – A little bit of Midwestern bias, I admit, but it doesn’t really feel like anything of consequence happened in the ACC this week. The conference didn’t have a bad week, per say, but it sure was dull. The most exciting game of the week, Clemson’s 23-17 victory over Louisville, had little meaning in the big ACC picture. Clemson remains a game behind Florida State in the Atlantic division, and Louisville is now two losses behind. North Carolina played their best game of the year in their loss to Notre Dame, but still were essentially handed 19 points due to unforced Irish turnovers. Their defense also gave up 50 points for the third time this year.

The most important result came in Duke’s 31-25 victory over Georgia Tech. The Yellow Jackets are no longer unbeaten, and the dream for the seven-way 4-4 ACC Coastal remains. The ACC will be thrust back into the spotlight a couple times this week, though. Florida State takes on Notre Dame in the game of the week Saturday night, while Virginia Tech and Pitt have the Thursday night game on ESPN. The dream to 4-4 also marches on, with the Virginia/Duke match-up Saturday taking on particular meaning.

F: UCLA – It’s all falling apart in Westwood. UCLA fell 42-30 at home to Oregon Saturday, with garbage time touchdowns the reason the gap was so close. Dreams of a national championship were scattered about as defensive issues came to a head at home. UCLA has now given up 500 yards rushing over the past two games. One particular metric is alarming – UCLA is third-from-bottom in the nation in methodical drives – 25 percent of opponent’s drives last at least ten plays. Opponents convert third downs against the Bruins nearly 42 percent of the time, and nearly 47 percent of the time in Pac-12 play. Poor offensive line play has also hampered the Bruins, but the offense has done more than enough to hold its own if the defense could get off the field. It’s no wonder defensive coordinator Jeff Ulbrich wanted to give up.

UCLA’s now fifth in the Pac-12 South, sitting a loss behind USC, Arizona, Arizona State, and Utah. A Pac-12 title is almost out-of-reach. Coach Jim Mora is just trying to keep this together, and perhaps keep his job as well. That starts this weekend with a trip to Cal, which could prove tricky.

Week 8 sneak peak: Less than four days until Notre Dame/Florida State, which is killing me inside. Also – some nice Big 12 duels, and is this the week Texas A&M falls apart completely?

Well, I like TV and movies and I love sports. So expect a lot about that.
View all posts by aarongernes →
This entry was posted in Uncategorized. Bookmark the permalink.